Changdeokgung Palace is a grand royal residence located east of Gyeongbokgung Palace. It is the best preserved of the remaining Joseon palaces. The palace is the second oldest in Seoul after Gyeongbokgung and was used as a secondary palace when first built.

Construction on the palace known as “the palace of illustrious virtue” began in 1405 during the reign of King Taejong and was completed in 1412. Taejong was the third king of the Joseon Dynasty who ruled from 1400 to 1418.

General admission ticket does not include the Huwon secret rear garden.

Changdeokgung, and the rear garden, is included with the Integrated Ticket Of Palaces.

Gyeongbokgung was located in the west. Changdeokgung, along with Changgyeonggung Palace, were located in the east and therefore they were known as the “East Palace.”

Buildings are laid out in perfect harmony with the mountains and other natural surroundings. This unusual type of design is unique to Korea and has influenced the layout of other royal residences.

A number of kings resided here until it was burnt down and destroyed in 1592 during the Japanese invasion of Korea. Around 1610, reconstruction was started by King Gwanghaegun with help from King Seonjo. In 1623, it was destroyed yet again during political revolts and military coup d’etat. It was reconstructed 24 years later in 1647.

Changdeokgung served as the main royal residence of Seoul for 270 years. Sunjong, the second and last emperor of Korea who reigned from 1907 to 1910, lived here until his death in 1926. One of the many beautiful views of Korean palatial architecture

Though damaged, destroyed, rebuilt, and replaced throughout its history, Changdeokgung Palace still remains one of the best preserved examples of Korean palatial architecture.

Changdeokgung is considered one of the most beautiful palaces in Seoul thanks to its garden and natural surroundings. Not surprisingly, it became a UNESCO World Heritage site in 1997. 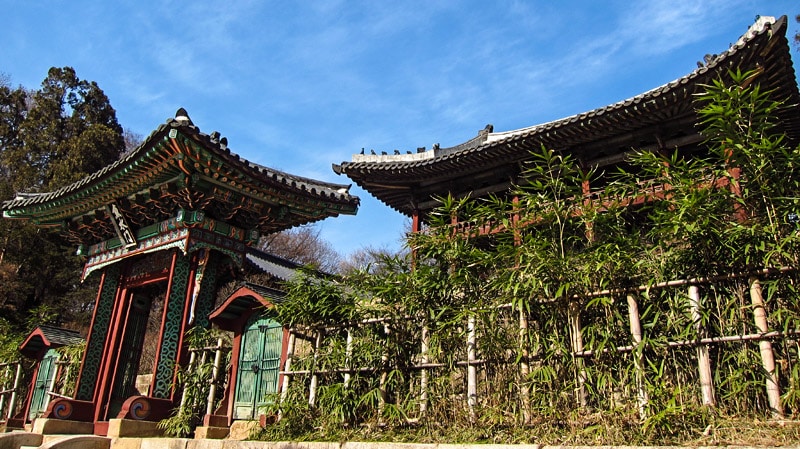 The view through one of the many gates at the palace

What to see at Changdeokgung Palace

This tree that stands here, known as the Changdeokgung Chinese juniper, is thought to be over 750 years old. The tree measures in at 12 meters (40 feet) high and 5.9 meters (19 feet) in circumference.

If you take a tour of the Huwon Secret Garden, the tree will be located on the left hand side as you exit the tour and walk back out to the palace.

Donhwamun Gate is the main gate at the entrance of Changdeokgung. It was originally built in 1412 during the twelfth year of the reign of King Taejong. Taejong was the third Joseon Dynasty king and ruled from 1400 to 1418.

The gate was destroyed and set on fire by the Japanese during the Imjin War in 1592. It was rebuilt and restored to its current appearance from 1607 to 1609 during the reign of King Gwanghaegun.

The pavilion features a simple two story wooden design. According to records, in 1413, a 7.5 ton bronze bell was hung here but has since been removed.

The passageways that visitors use today were made in the 1890’s and originally were used only by royal vehicles. Today, the gate remains one of the oldest existing main palace gates.

Gwolnaegaksa was the location of a collection of government offices. These offices handled royal family and political affairs. Other buildings included a library, pharmacy, regal decrees office, and royal counsel committee bureau. The area here resembled a labyrinth since so many buildings were located in such a small area.

During the Japanese occupation in the early 20th century, all the buildings here were destroyed.

In 2005, Gwolnaegaksa was rebuilt to its original design.

Huijeongdang Hall was used as a women’s residence and later as a place of work and rest for the king. It was here where the king would meet officials. The king and his officials would handle royal affairs and discuss political issues at this location.

The original building was destroyed by a fire in 1917. When rebuilt in 1920 by the Japanese government, materials from the king’s residence at Gyeongbokgung Palace were used.

Seonjeongjeon Hall was originally used by the king for work purposes and to discus state affairs with officials. When more room was needed, the king decided to relocate to Huijeongdang Hall.

The reconstructed building was built completely different than the original. The exterior of the building looks like traditional Korean architecture but the interior is western in style.

The east meets west architecture of the new interior featured many amenities not common in early 19th century architecture in Korea. These amenities included a vehicle waiting area in the front, glass windows, wooden floorboards, electricity, lights, a chandelier, bathrooms, and curtains.

Injeongjeon Hall is the main hall at Changdeokgung Palace. It was used by the king and officials for conferences and as a meeting point with visitors. Foreign envoys would meet the king at this location when they arrived at the palace.

The royal walkway and courtyard, dating back to 1609, can be seen in front of the hall.

A terraced garden can be found behind the building. It was thought that the garden could channel positive energy from the surrounding mountains, and Maebong Peak, into the palace.

The area surrounding the courtyard was used for storage and for royal guards as they protected the king and the residence.

Leaving the courtyard leads to a single roofed gate known as Injeongmun Gate.

Jinseonmun Gate is the small inner and middle gate. To reach the main throne hall, you must pass under three gates, one of which is Jinseonmun. The other two are Dowamun and Injeongmun.

In front of the structure is a wide stone bridge known as Geumcheongyo. Bridges similar to these are a common royal feature and symbolizes purifying oneself who passes over it.

Passing over the bridge and through the gate is a sign of royal sovereignty and is often seen at other royal residences in Seoul.

The Nakseonjae Complex is a residential compound built in 1847 during the reign of King Keonjong. Queen Myeongheon, the wife of Heonjong, was unable bear a child for the king. Therefore, Heonjong took a concubine by the name of Gyeongbin to bear his child. Nakseonjae was built for Gyeongbin in an isolated corner at Changdeokgung Palace.

Nakseonjae Pavilion was a library built for the king where he would read and paint. Seokbokheon was the residence of Gyeongbin. Sugangjae was built for Queen Sunwon, the grandmother of Heonjong.

A garden can be found in the rear of the residence. Nearby, is a simple and elegant pavilion known as Sangryangjeong, or Pyeongwonru before the Japanese occupation. This pavilion was used for rest and offered a beautiful view of the palace area below.

The architectural style is without vibrant and colorful royal decorations that is commonly seen with other royal residences.

The pavilion was used by the royal family until the late 20th century. The complex was opened to the public for the first time in 2006 after many years of restoration.

Seonjeongjeon Hall is where the king would meet with high ranking officials at Changdeokgung Palace to discuss political, state, and palace affairs. At his convenience, the king and his officials would hold seminars and have morning meetings. He would discuss royal issues and other national affairs.

The colonnaded area which surrounds the building was used for storage and for secretary offices. A narrow corridor leads to Seonjeongmun Gate. This corridor was used during royal funerals when Seonjeongjeon Hall served as a royal shrine. This corridor is the only remaining evidence of its function during funerals.

The roof of the structure is the only existing blue tiled palace roof.

Seonjeongjeon Hall lies to the east of Injeongjeon, the main throne hall at the palace.

Seonwonjeon Hall was the location at Changdeokgung Palace where portraits of former kings were enshrined and where ancestral rites were performed. At a time, King Taejo, King Yeongjo, and King Jeongjo all had their portraits enshrined at here.

The original building was moved to this site in 1656 from nearby Gyeongbokgung Palace. At the time, and until 1695, the building was known as Chunhuijeon.

During the Japanese occupation in 1921, a new hall was built inside the Huwon Secret Garden. Ancestral rites were now performed at this location.

The simple structure seen today was used for storage of courts valuables. Auxiliary buildings, Jinseolcheong and Naechaldang, which are located to the left and right of were restored in 2005.