Deoksugung Palace was the location where Prince Wolsan, older brother of King Seongjong, lived. At the time, the residence was not known as a palace yet. The area consisted of residential buildings for descendants of the royal family.

During the Japanese occupation of Korea in 1592, the residential buildings became a temporary royal residence after all the other palaces were destroyed by fires.

Know Before You GoEntrance into the National Museum of Art requires a separate entrance fee.

Admission is included with the Integrated Ticket of Palaces.

In 1608, King Gwanghaegun was crowned king here. In 1611, the temporary residence was renamed Gyeongungung, thus making it a true royal palace. In 1618, Changdeokgung became the main palace after being rebuilt.

Gyeongungung, renamed Seogung (West Palace), became an auxiliary royal residence for for the next 270 years and played no important role until the end of the 19th century. In 1897, Emperor Gojong established the Great Han Empire and moved here, which he renamed back to Gyeongungung and became the central palace of the empire. Gojong was determined to modernize the country as seen in some of the western style buildings.

In 1907, after his reign was over, Gojong continued to live here. His successor, Emperor Sunjong, renamed it Deoksugung in honor of Gojong. The name was meant to wish Gojong a long and prosperous life. Gojong lived here until here until his death in 1919 at Hamnyeongjeon Hall.

Many of the structures here have since been removed or sold. In 1933, all buildings except for a few central and western style buildings were removed. It was then made a park and opened to the public.

Since 2007, restoration work to restore Deoksugung Palace to its original specifications. This work has been ongoing.

What to see at Deoksugung Palace Daehanmun Gate is the main gate of Deoksugung Palace. Located in the east, it became the main entrance of the palace after the completion of Hwangudan Altar (Wongudan Altar). The original main gate was Inhwamun. In 1970, it was moved to the west because of the nearby expansion of Taepyeong-no Street.

Just past the gate is Geumcheongyo Bridge, the oldest surviving bridge in Seoul. 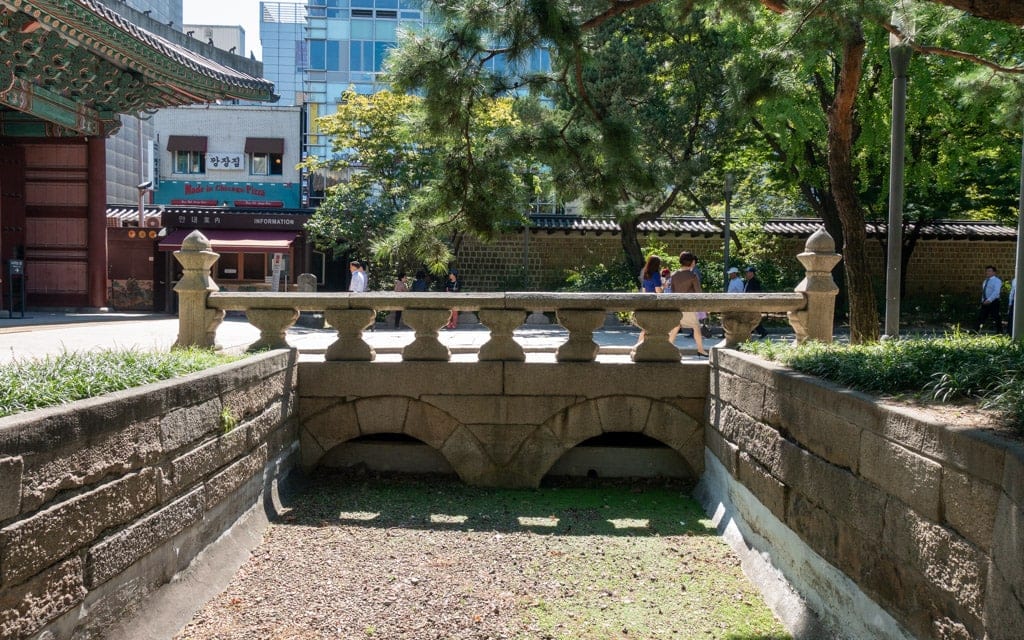 Geumcheongyo Bridge is located just past Daehanmun Gate on the grounds of Deoksugung. The bridge was built in 1411 and is the oldest surviving in Seoul. The bridge was excavated and restored in 1986.

Those who enter through the main gate cross over a stream, a common sight at other palaces in Seoul. Crossing the stream symbolizes purifying oneself before entering. Junghwamun Gate is the inner gate of Deoksugung and the main gate of Junghwajeon Hall. The gate, along with Junghwajeon, were rebuilt in 1906 after being destroyed by a fire making it one of the last structures built during the Joseon Dynasty.

A courtyard just past the gate was the location of state ceremonies. Stones indicate and mark where officials would stand based by rank. Those standing closest to the king were officials of high ranking. Located on the hill of the rear garden is Jeonggwanheon Pavilion. The pavilion was used for banquets for foreign visitors when they visited the palace. The building was constructed around 1900 by A.I. Sabatin, a Russian architect. He was influenced both by Korean and Western designs.

The design features Romanesque style colonnades that surround the perimeter of the building. The columns are made of imitation stone.

Verandas can be found on three sides of the building, on the west, east, and south. Wooden columns on the verandas are decorated with dragons, bats, and vases. These decorations are quite common Korean motifs.

Gojong enjoyed drinking coffee at the pavilion when he was at the palace. Junmyeongdang Hall was where King Gojong handled palace and state affairs during his reign. He also welcomed honored guests and foreign officials here. The original structure, along with Jeukjodang, was destroyed by fire in 1904. The hall was rebuilt later that same year.

In 1917, Emperor Gwangmu established the Deoksu Palace Kindergarten here for his daughter Princess Deokhye. Young girls from noble families attended the kindergarten at the palace.

After Gojong’s death in 1919, portraits of himself and Sunjong were enshrined in the hall.

Junmyeongdang Hall is connected to Jeukjodang Hall by a narrow corridor. Jeukjodang Hall is where King Gwanghaegun (1608) and King Injo (1623) were crowned as kings. Its name means “house where kings ascended their throne.” Gwanghaegun reigned from 1608 to 1623 while Injo reigned from 1623 to 1649. The original structure, along with Junmyeongdang, was destroyed by fire in 1904. They were both rebuilt later that same year.

The sign in front of the hall was written in 1905 by King Gojong just after he ascended to the throne. Gojong was the twenty sixth Joseon Dynasty King and ruled from 1863 to 1907. 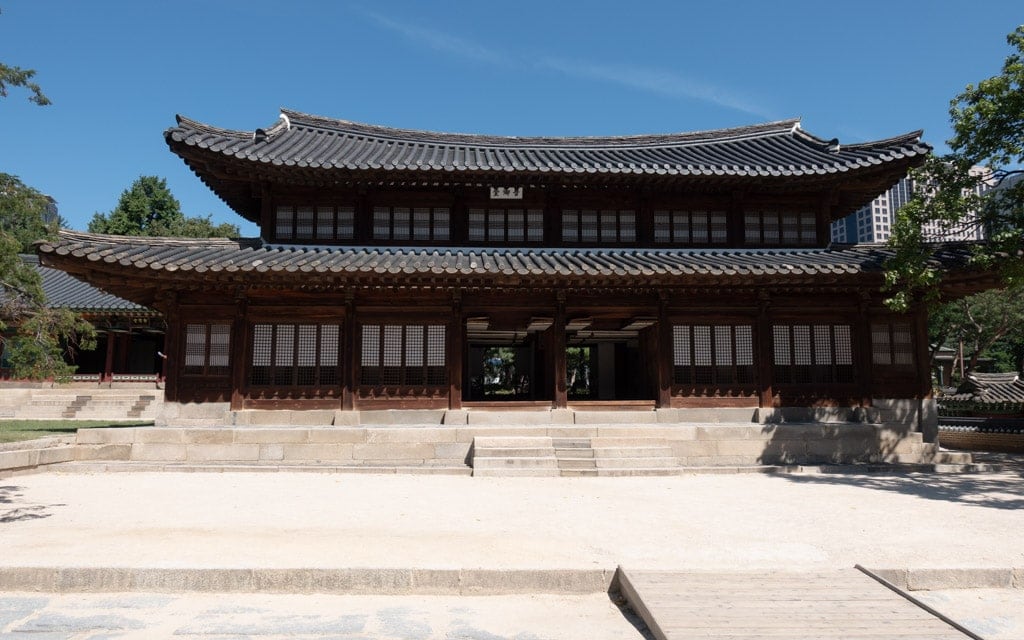 Seogeodang Hall is an ordinary and plain two story wooden house where King Seonjo lived and died. He was the 14th Joseon king and ruled from 1567 to 1608. The design is ordinary without decorations or paint, which is similar to houses at the time.

The hall features a two tiered roof, the only one at the Deoksugung Palace. The building resembles a typical private residence during the Joseon Dynasty.

During the Japanese invasion in the late 16th century, Queen Inmok, the wife of King Seonjo, was confined here for 10 years.

In 1623, many of the buildings and land in the area were returned to their original owners. This hall and Jeukjodang were not sold and later preserved.

In 1904, this building, along with Junmyeongdang and Jeukjodang, were destroyed by a fire. They were all rebuilt later that same year. Junghwajeon Hall is the main throne hall at Deoksugung Palace. Jeukjodang Hall originally served as the throne hall until Junghwajeon was built to the south. When the hall was built in 1902 it featured a two tiered roof. In 1904, it was damaged by a fire. It was rebuilt two years later with a single level roof as seen today.

Inside the building is a painting called Irwoloakdo. It features the sun, moon, and five mountains. This painting symbolizes the wish of the Korean people for their emperor to be prosperous forever. Dragons seen on the roof symbolize total authority of the emperor.

The haenggak outside of the hall was also rebuilt. A haenggak is a small roofed structure that served as storage or for shelter for works at the palace. Only part of the haenggak remains today.

The two tiered stone terrace located outside of the building is known as a woldae. This feature is common of traditional royal residence architecture and can also be seen at Jongmyo Shrine. Gwangmyeongmun Gate was once the south gate at Deoksugung Palace. It contains a water clock, a hanging bronze bell from 1462, and a rocket cannon. The gate, which resembles a pavilion once led to Hamnyeongjeon Hall, where the king resided.

In 1938, during the occupation, the Japanese moved the gate near Seokjojeon Hall. At this time, the hall was being expanded.

Inside the structure is a water clock, bell, and cannon. The water clock, which is automatic striking, is known as Jagyeokru. The bell, forged in 1462 during the Joseon Dynasty, is from Heungcheonsa Temple. The cannon, which can be wheeled, uses gunpowder and can fire 100 arrows at the same time. Seokjojeon Hall, built in 1910, is a Western style building used as an audience hall and sleeping quarters of King Gojong and later as an art museum. The architectural style is 19th century neoclassical, with ionic style colonnades, and a triangular roof. This is very unique to Korea and interesting compared to other buildings at Deoksugung.

In 1938, the west wing of the building was expanded. During the expansion, a garden and fountain were constructed in front and Gwangmyeongmun Gate was moved to its current location. Deokhongjeon Hall is where King Gojong met with high ranking and foreign envoys and other officials. Construction on the building was completed in 1911. The hall is one of the newest structures at the palace.

Deokhongjeon Hall was built on the former site of Gyeonghyojeon, the spirit hall of Empress Myeongseong.

The outside of the hall is designed with traditional Korean architecture while the design on the inside of the hall is Western style. A chandelier hangs from the ceiling inside. The building was retrofitted with electricity which was quite rare at the time.

Just nearby is Hamnyeongjeon Hall.