The Gwanghwamun Square walking tour will take you through the Central Government Complex as you walk past plazas, sculptures, streams, waterfalls, statues, government buildings, gates, and palaces. This tour will give the first time visitor to Seoul a better understanding of the city and an idea of the layout, history, and future of Seoul.

This walking tour starts at Gwanghwamun Station (Exit 5). From the station exit, walk straight for 65 meters until you see the bright and colorful Spring Sculpture at…

Cheonggye Plaza with the Spring Sculpture in the background

This open space is known as Cheonggye Plaza. It is a public square in central Seoul that commemorates the restoration of the Cheonggyecheon Stream which at a time was an eyesore to the city and later an elevated highway. The plaza is located at the head of the stream which runs 8.4 kilometers (5.2 miles) through the heart of Seoul.

At the western end of the plaza is the colorful red and blue sculpture known as the Spring Sculpture. This sculpture, which represents new life for the Cheonggyecheon Stream area, was created by Coosje Van Bruggen and Claes Oldenburg. The shape was inspired by a shell rising up like a pagoda. The colorful ribbons that run down the side are inspired by the traditional dress of Korean women.

At the eastern end of the plaza is a 4 meter (13 foot), two-tiered waterfall. Wishing wells on both sides of the waterfall were created used eight stones from each of the eight provinces in Korea.

From Cheonggye Plaza, you can continue down the paths of the Cheonggyecheon Stream as far as you want, but to continue the walking tour, turn around and leave the plaza the way you came in. Leave the plaza and head to the right back towards Gwanghwamun Station. Continue north past the station exit and cross the street in front of you. After crossing the street on the corner you will find the…

This monument honors the 40th anniversary of the crowning of Gojong as the 26th Joseon Dynasty king. Gojong became king on December 13, 1863 at the age of eleven. Since he was too young to rule on his own, His father, Heungseon Daewongun, ruled for him until he was an adult in 1873.

In 1896, Gojong took refuge at the Russian legation after the assassination of his wife, Empress Myeongseong. One year later, in 1897, Gojong relocated to Gyeongungung, known today as Deoksugung Palace. It was here where he proclaimed the founding of the Korean Empire, also known as the Great Han Empire. Gojong became the first Emperor of the Korean Empire.

From the monument, cross the street towards the large stone pillar with the statue on top. When you reach the middle of the street, you will have arrived at the beginning of Gwanghwamun Square. This square runs from south to north for about 550 meters to Gwanghwamun Gate and Gyeongbokgung Palace. Walk north towards the pillar with the statue. You have now arrived at the…

This towering statue is that of Admiral Yi Sunshin, also known as Yi Sun-sin. Yi became famous for his military achievements during the Imjin War (1592-1598). Yi received no naval combat training prior to the war yet remained one of the only undefeated naval admirals and one of the most respected admirals in military history.

During the Battle of Myeongnyang against the Japanese navy, Yi’s fleet was outnumbered 333 ships to 13. Remarkably, the Japanese were defeated. Yi was elevated to a naval genius.

He was killed by a single bullet in 1598 during the Battle of Noryang. At the time, the mighty Japanese army was all but defeated in the Korean Peninsula.

Statue Of King Sejong The Great This is a golden statue of King Sejong the Great. This much respected fourth king of the Joseon Dynasty reigned from 1418 to 1450. He was responsible for the creation of Hangul, the Korean alphabet, and other advancements in science, military, art, and politics.

A passageway behind the statue leads to a museum known as the Story of King Sejong Exhibition Hall. It is here where visitors can learn of the accomplishments of this this mighty king such as the creation of Hangul and his contributions in the development of Korea.

Stand facing the statue of King Sejong the Great. Now look to your right across the street at the building with the flying American flag that is patrolled by a large amount of police officers. This is the...

Embassy of the United States, Seoul The United States and Korea have had diplomatic relations for almost 150 years. The United States embassy in Seoul has been operating since the end of the Korean War. This building seen here was built in 1962 and used originally as the office for the United States Agency for International Development and then a few years later changed to the embassy.

Many demonstrations by Koreans against the United States have occurred outside this building.

Continue north up Gwanghwamun Square for 270 meters. When you reach the end of the square, across the busy road is the iconic… 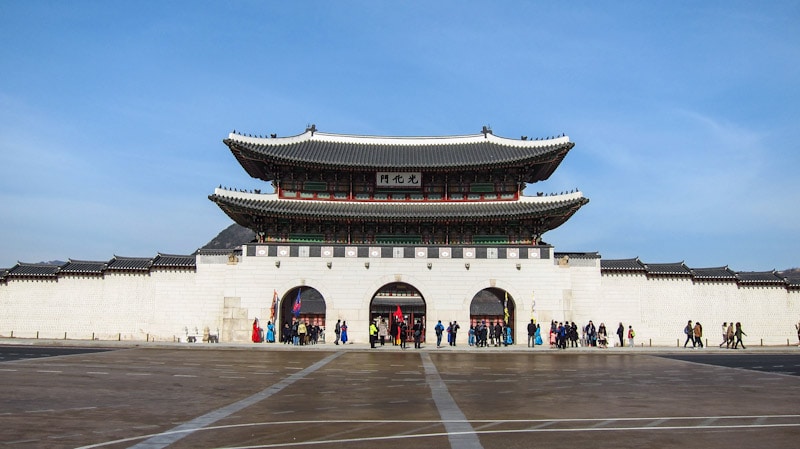 Gwanghwamun Gate is the main gate and one of four gates that can be found along the 2,404 meters (7,887 feet) of walls surrounding Gyeongbokgung Palace. It consists of three entrances and a two story pavilion and at one time was guarded by watchtowers.

The gate was built in 1395 at the beginning of the Joseon dynasty. Since it guarded the main Joseon palace, it quickly became one of the most important gates in the city. The gate was destroyed by the Japanese in 1692 during the Imjin War. In 1867,it was reconstructed along with Gyeongbokgung Palace. During the Korean War, the wooden gatehouse was destroyed once again. It was rebuilt using concrete and remained this way until 2006.

Restoration work was completed in August 2010 which restored the gate to its original wooden specifications. The total cost was 28 billion won ($24 million).

This completes the walking tour of Gwanghwamun Square. If you continue through the gate, you will enter Gyeongbokgung Palace.